Foreigners have bought $7.6 billion of stocks since the end of June.

Domestic firms offloaded $889 million of shares in August, the first month of net sales since February 2021. Foreigners have bought $7.6 billion of stocks since the end of June, after pulling out a record $33 billion since October.

The changing of the guard hasn’t derailed Indian stocks, which are up an impressive 10% since the end of June even as the rest of the world’s equity markets falter. Despite the overall selling of domestic investors, mutual funds have continued to receive a monthly inflow of more than $1 billion. 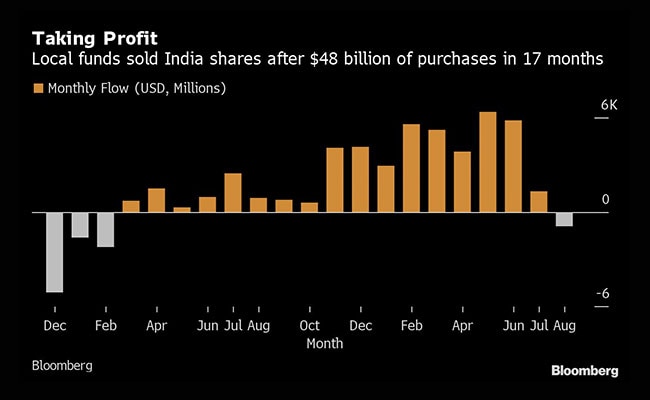 Hedge fund giant Man Group Plc is betting on defensive stocks in India, and a technical chart is signaling that the nation’s shares are poised to take off.

The NSE Nifty 50 Index is a week into a so-called golden cross pattern, with its 50-day moving average above the 100-day moving average in a bullish signal. The last time the phenomena happened in July 2020, the gauge climbed almost 90% over a 15-month period.

(This story has not been edited by NDTV staff and is auto-generated from a syndicated feed.)