EV penetration in India is happening at breakneck speed.

Electric vehicles are set to change the automotive landscape forever.

The transition has already started.

EV penetration in India is happening at breakneck speed. There are already more than a million EVs plying on Indian roads today.

And despite negative press on EV battery fires, sales of EVs are skyrocketing.

Nexon EVs are now a common sight on the Indian roads.

No wonder shares of Tata Motors have rallied by over 600 per cent in just two and a half years.

And it is not just Tata Motors, Mr Market has rewarded any company with a credible EV story, with rich valuations. If you’re a shareholder of EV stocks in India, you already know this.

It’s not just the automakers that are bringing this revolution. There’s an emerging industry in India that is powering this big shift.

Which industry am I talking about? Well, it’s the EV battery industry…

This industry is set for a massive re-rating.

Do you know why? Because for the first time in the history of the automobile industry, EV batteries are finding mass adoption.

It has never happened before.

Electric batteries have been in existence for decades. But the change we’re seeing now is unlike anything we’ve seen before.

You see, Japan’s Sony was the first company to commercially use Li-ion batteries in the early 1990s to power video recorders.

And since then, these batteries have found applications everywhere.

They power everything from your mobile phones, laptops, and even your children’s toys.

But imagine powering a 3-ton SUV with these batteries. It requires engineering at a whole different scale.

You know, a typical electric vehicle contains around 5,000 battery cells in a pack. In 2010, this battery pack would have cost around $1,200/kWh.

At this price, a typical car battery would cost around Rs 30 lakh.

Yes, Rs 30 lakh for the battery alone. It is impossible to mass-produce electric cars with such an expensive battery.

But over the last 10 years, a lot of research has been done with new battery chemistries and compositions. And they have drastically reduced battery prices. 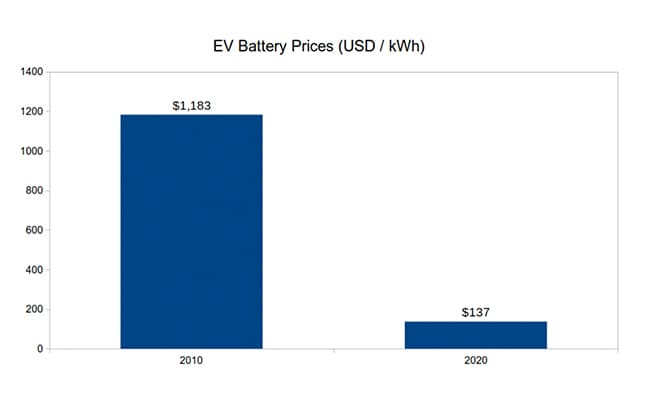 And BloombergNEF research predicts that by 2023 this will fall further to $101/kWh.

Below this price point, electric vehicles would be cheaper to mass produce and sell than internal combustion vehicles.

That’s the tipping point. And it is coming as soon as 2023. Just a couple of years from now.

That’s the reason why every major auto-makers are dumping internal combustion vehicles today and going electric. Because they know that the future of the auto industry is electric.

And this has led to many companies adopting electric vehicles in droves.

Fleet operators like Uber and Ola are investing heavily in electric vehicles.

Even last-mile delivery players like Swiggy and Zomato have started converting their fleet to electric.

And all this is happening not because of some government mandate… but because it makes pure economic sense for these companies to go electric.

Then going electric becomes the obvious choice. Because operational costs are one-tenth.

As Angela Hultberg, Head of Sustainable Mobility at IKEA said,

“The cost of not changing is bigger than the investment.”

Over the years, we could see many more companies converting their fleet of vehicles to electric.

And after commercial vehicles, we could see a flood of demand from the passenger vehicle segment.

Now if we just look at India’s numbers then the opportunity is humongous.

There are more than 27 crore vehicles registered in India. And out of this, around 82 per cent are petrol vehicles. 15 per cent diesel vehicles. And electric vehicles have only a tiny 0.3 per cent share right now. 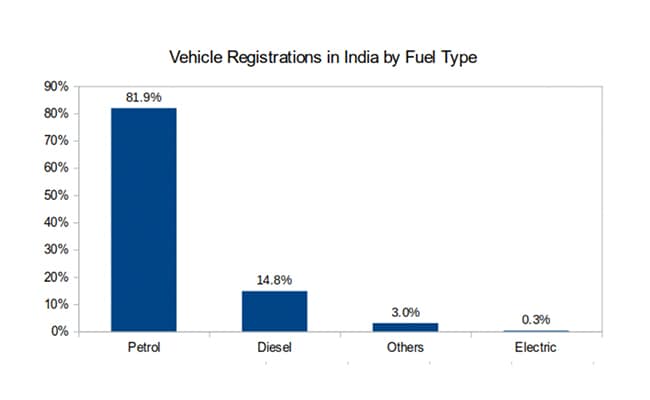 But that’s where the biggest opportunity lies.

Because this bar of electric vehicles is rising exponentially. 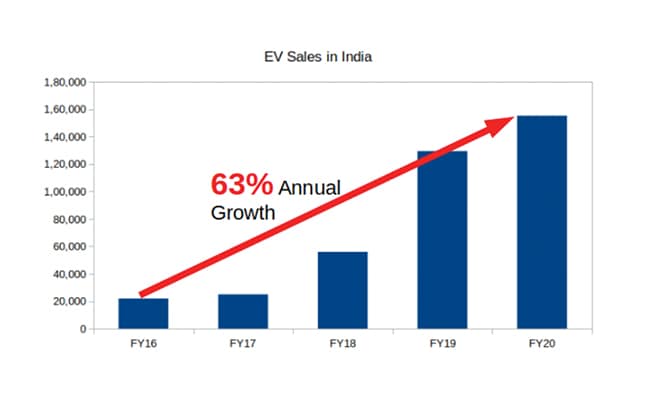 With so much demand coming in… stocks of a few EV companies have only one way to go… that is UP.

The Right Way To Benefit From This Gold Rush

With automakers going all electric, we could see millions of electric vehicles hitting the roads over the coming years and decades.

And guess what…the demand for EV batteries is going to skyrocket over the coming years.

Just between 2021 to 2025, the global EV battery market is projected to grow by 25 per cent annually.

With so much growth happening in such a short time, EV battery makers could potentially generate life-changing gains for their investors.

Traditional battery makers make Lead-acid batteries. The ones we use in our cars and bikes. Lead-acid technology is quite stable and well developed.

That means once the initial investment is made by the battery makers… they could continue to reap benefits for years to come.

But this is not the case with electric vehicle batteries. As you know, the technology for these batteries is still under heavy development. There is no clear winner.

Lithium-ion is the umbrella term used for electric vehicle batteries. But the actual percentage of lithium in a lithium-ion cell is only 2 per cent.

The rest of the content keeps changing based on the battery chemistry. And there are so many variations out there…

And then there are lithium sulphide batteries, sodium sulphur batteries (NaS), lithium-metal, metal-air, solid-state batteries, and many more.

And what makes the matter even more complex is different car companies use different battery technologies.

That means the battery maker needs to have the capability to develop multiple technologies.

The EV battery company you invest in should be at the forefront of innovation. It should be making heavy investments into new and upcoming battery technologies like aluminium fuel-cell technology.

Over the coming years, millions of electric vehicles are going to hit the roads.

So, over the long term, the EV battery company you invest in could potentially make fortunes by supplying batteries to EV makers.

The EV revolution is upon us. Governments around the world are accelerating adoption of EVs through incentives, regulations, and mandates.

This trend has already had a positive impact on battery manufacturers as well as suppliers of semiconductor chips and electronics used in these devices.

In particular, strong demand is seen for lithium-ion batteries used in EVs rather than lead-acid batteries that are commonly used in hybrid electric vehicles today.

With nearly every automaker jumping on the bandwagon to develop more electric and hybrid cars, battery makers stand to benefit the most from this trend.

All of this information should help you get started on how to invest in electric vehicle stocks.

But before you invest a single rupee in EV stocks, we recommend you watch this video to study the results of our latest research project.

Disclaimer: This article is for information purposes only. It is not a stock recommendation and should not be treated as such.

This article is syndicated from Equitymaster.com.

(Except for the headline, this story has not been edited by NDTV staff and is published from a syndicated feed.)